Community radio stations like Radio Tierra thrive when they have dedicated and talented volunteers. And by that, we mean people like Juan Reyes. 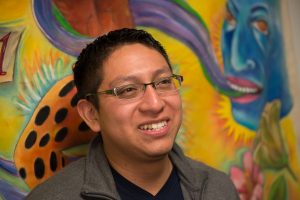 Juan sits on Radio Tierra’s Board of Directors and recently started a new radio show: Que Chido.  “As a board member, I help make some of the hard decisions,” he says. “I also help with translations and do some work on the website.”

On Que Chido Juan features a different musical artist each time. He plays their music and tells listeners about the musician and the music that influenced them. The show airs the second and fourth Thursdays each month from 6 to 7 p.m.

Juan lives a busy life. He works for Hood River County as a Property Appraiser. He’s the father of three young daughters. He’s a volunteer teacher for GED classes. Why take on volunteering for Radio Tierra?  “One of the main reasons that I volunteered was because I love helping people!  I feel that Radio Tierra is the center of information and outreach for the Hispanic community. And in the future the whole community I hope,” he says.  “So what better way to help people than to be a part of an amazing team that is always working to make this community a better place to live.

The kind of community he wants for his daughters.

“They are the loves of my life, I have always said they are the part of me that I never knew were missing, with them here I know that being a dad is what I was meant to do. I know everyone always says this about their kids, but they are an amazing little trio,” he says. “All three of them do dance, that would be ballet and hip-hop, and also Mexican Folkloric Dance in the summer. They also LOVE music, so a lot of my music selections have been based off of their taste in music.”

He spent most of his childhood in Parkdale in a little picking cabin with his parents and younger brother and sister. The family moved to The Dalles for a few years before moving to Odell when he started his freshman year in high school.  “I’ve been there ever since.”