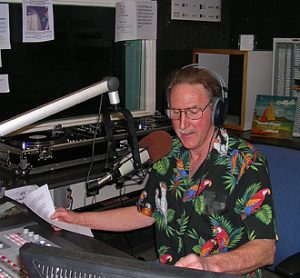 KZAS is excited to announce the kick off of a brand new bluegrass music show, Radio Hula. hosted by Mike Nichols starting Monday evening, August 15 from 7 – 9 p.m. The show will air the first and third Monday evenings of the month. His program will alternate with Nate Fleming’s show, One Drop Radio, on the second and forth Monday evenings in the same time slot.

Mike, a Bluegrass fan for over 50 years, previously hosted a bluegrass radio show in Durango, CO on KDUR community radio station sponsored by Fort Lewis College. Here he’s going to share his extensive music collection with Radio Tierra listeners–33 1/3 vinyl records and hundreds of CDs. He’ll play  music from the early 1970s to the present with some material from the 40s and 50s that was re released on vinyl and CD. He continues to add new, traditional bluegrass music. Listen in!